This project is the first to assess the types and severity, as well as individual and contextual correlates of harms from others’ heavy drinking in a wide range of societies with greatly varying drinking cultures and alcohol policies. It includes studying alcohol’s harm to others (AHTO) in a multinational, public health framework. The study will apply new metrics, including reduced quality of life and other costs, to estimate the severity of second-hand impacts of alcohol.

By studying comprehensively how individual, social, and economic influences within regions and societies may affect heavy drinkers’ harms to families, friends, and strangers, the research will inform prevention planning and alcohol policy development in varying cultural contexts. This approach is similar to using data on second-hand smoking harms to inform tobacco regulations.

Worldwide, most research on alcohol’s harms has focused on how heavy drinking harms the drinker himself or herself, since alcohol intake can cause significant acute and chronic harms and premature death. However, alcohol not only adversely affects the drinker but can also inflict harm on others—family members, friends, acquaintances, and strangers. Only a few types of harms to others (e.g., drink-driving, fetal alcohol effects, intimate partner violence) have been well studied.

There is a dearth of knowledge about alcohol’s broader harms to others (AHTO; also known as alcohol’s second-hand effects). Initial studies in a few high-income countries (Australia, New Zealand, and the US) show that heavy drinking can hurt families, create financial burdens, reduce quality of life, and engender fear. These second-hand effects may double the social costs directly incurred by harms to drinkers themselves. This is one of the first multinational analyses of drinking’s harm to others, providing new insight into how differing social and cultural contexts are related to levels, types, and severity of AHTO.

We are combining surveys from 21 countries of the GENACIS Project (Gender, Alcohol and Culture: An International Study) with surveys from 16 other countries (countries in a WHO-Thai Health collaboration plus separately-funded surveys in additional countries, including the US).

The GENACIS surveys provide detailed data on characteristics of drinkers who report causing harms to others, and the WHO-Thai Health and related surveys provide equally detailed data from the victims (both drinkers and nondrinkers) of alcohol-related harms from other people’s drinking. These surveys were selected to provide a unique asset: data on regional variations in AHTO and its correlates within countries.

The societies surveyed have a wide range of alcohol policies, drinking cultures, and variation in socioeconomic conditions, including income and gender inequalities. Within a multilevel social ecological framework, we are using these unique data to test hypotheses about (1) individual and contextual factors associated with persons who report having experienced AHTO as well as persons who report having caused AHTO; (2) regional differences in conditions within countries that may modify individual risks of AHTO; and (3) how regional variations in drinking cultures may interact with alcohol policies to prevent or promote harms caused by heavy drinkers.

Analyses take advantage of hierarchical linear modeling (including multilevel interaction effects), risk curve analyses and, where appropriate, propensity scoring methods. The proposed analyses will provide the most detailed multinational findings available to date on the individual, social, and cultural influences that may increase or reduce alcohol’s AHTO. Using these findings, we aim to identify opportunities for better-focused interventions and policies to reduce alcohol’s second-hand effects under a range of environmental conditions.

Aim 1: Identify characteristics of both individual victims of AHTO and individual drinkers who cause AHTO.

Aim 2: Reveal how rates of AHTO differ among regions within countries. 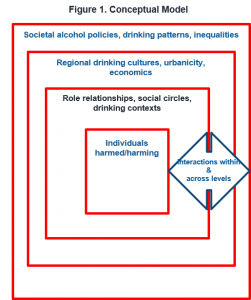 We view AHTO as occurring within a nested multi-level set of potential influences – a more complex and realistic view of alcohol problems than typical of earlier research.

The central influences are a) characteristics of individuals experiencing and causing AHTO, such as gender & drinking patterns. These are imbedded in b) the individual’s role relationships (such as in families & friendships), social circles (such as exposure to heavier drinkers), and drinking contexts (such as in public places or at home), which in turn are imbedded in c) regions where the individual lives (with attributes like urbanicity, economic conditions, and drinking cultures). The highest level of potential influences are d) societal characteristics, and of particular importance are: d.1) specific alcohol policies like access restrictions, and d.2) social disparities such as gender inequality, income inequality, gender-specific rates of abstention and heavy episodic drinking, and gendered drinking norms.

Each level of influence may affect AHTO directly (additive effects) but also in interaction with lower- and higher-level influences (multiplicative or contingent effects).

Multilevel analyses will be the first to combine individual and social-environmental characteristics from numerous diverse societies and their sub-regions, to predict AHTO cross-culturally.

This is the first cross-national study to examine how regional drinking cultures (e.g., abstention, heavy drinking, norms) may moderate influences of national alcohol policies on experiencing harms from others’ drinking.

The two major datasets we use (GENACIS and AHTO) provide detailed data on drinking patterns of both perpetrators and victims of AHTO, respectively, to explicate key contextual and individual predictors of AHTO.

Our conceptual model encompasses studying AHTO in the context of interpersonal relationships (such as family and friendships) and harms involving strangers (such as in public encounters with intoxicated individuals), as well as how AHTO is related to drinking contexts and an individual’s social circle.

We will extend Propensity Score methods to incorporate both individual and region/country variables to develop better matched comparison groups for estimating impacts of specific types of AHTO.